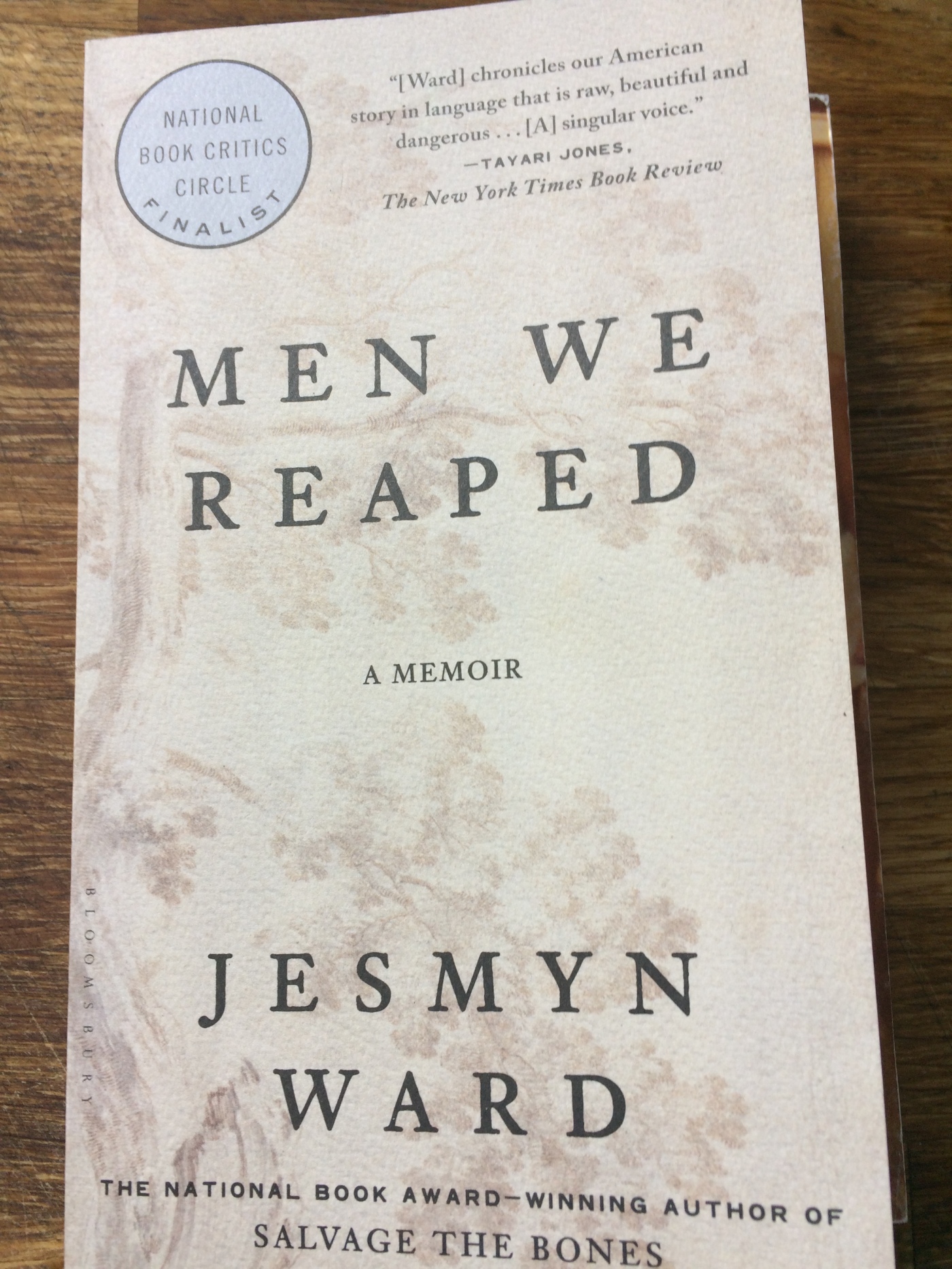 “Hopefully, I’ll understand why my brother died while I live, and why I’ve been saddled with this rotten fucking story.”

By any measure this an extraordinary book: the nature of what is related; the accomplishment of how it is related; an understanding of what a necessary but yet heartbreaking exercise (exorcism?) this must have been for Jesmyn Ward. This “rotten fucking story” is her story, the story of people she grew up around and it is a memorial to those, those too many, who died unnecessary, young deaths.

First a word about the author: by her own telling she was born and raised in poverty, in a series of more or less temporary homes / trailers in a series of downtrodden towns that satellite New Orleans on the Gulf of Mexico coast, where it is heavily wet and hot and there are plenty of bugs. The eldest of 4 kids in a family where the mother did the working and the raising while the father was a sometimes present figure, but one who was hugely attractive to his kids when there, with his kung-fu moves and films. And when he wasn’t about, he was off with other women, having ‘at least 10 children’ with ‘at least 4 mothers’. Ward was a premature birth and not expected to live. Her early years saw illnesses, which again she was not expected to survive. Her schooling was initially promising but quickly fell away under bullying, lack of stability and general pressures of being 10 or 12 years old and having to help raise the younger kids. This is where one of the great ironies of her life comes into play: the father of the white family for whom Ward’s mother was a cleaner – in their big old ante-bellum house on the waterside – heard her mum worrying about the drop in Ward’s school grades. This was a girl he knew from previous conversations was a gifted student. He reasoned that he could help her and so paid for an annual scholarship that would see her to graduation in a ‘good’ private school, where she was only black kid and faced daily racism from her well-to-do, good-society classmates. From there she went on to Stanford, a Masters degree and all the renown that she has garnered as an author…and she is one hell of a novelist, go and read Sing, Unburied, Sing and understand why they are talking of her in the same breath as Faulkner. Where to start with what must be acknowledged as genuinely good human gesture by this wealthy man, but what of all the undertones and difficulties it exposes about America, the Deep South, capitalism, the in-your-face racism, paternalism? All of which, in relation to her, isn’t really the subject of her book.

Ward’s book is talking about her pre-college life in DeLisle, Pass Christian and other places and of her horror in the senseless deaths of 5 young men she knew well, including her own beloved brother Josh.

To start with here are the dates of the those five men:

The book is in 12 chapters: there is an introduction and an epilogue, then each of the other 10 chapters are alternated; the story of one of these men (and how Ward knew them) interlaced with chapters of Ward’s own stories and remembrances.

The poverty is grinding, the stories behind the deaths always start with a young kid with a winning smile and a happy disposition, turned on its head by the simple grind of being young, black and male in (Southern) USA. There are too many head-shaking , ‘what-if’. ‘if only’ moments in this book to go round picking them out, the point, it seems to me is that the ‘what-if’ just never, or almost never, happens to the people in this demographic because ‘it’ is stacked against them; they are disposable, and when you come to understand that your world sees you as disposable then it is hard for most, not to live to that expectation and become reckless. Even when the death is not the result of actions by the young man but, as in the case of her brother, those of a drunken white driver, far exceeding the speed limit, the system of the South makes sure that it is the black side of the equation that bears the weight: the driver eventually serving short time for leaving the scene of an accident and not reporting it. The stories are close to home and at times Ward sounds traumatised by the telling and the remembering.

She has gone to meet her mother from her work cleaning the big house, and is early, so she is invited in by the mother of the family, they sit in the kitchen and chat about college prospects for Ward while her mother cleans around them. She recalls WE Du Bois and his thoughts on the double consciousness needed to survive, “I was aware that the wife was talking to me like an intellectual equal, engaging me…How the privilege of my education, my eventual ascent to another class, was born in the inexorable push of my mother’s broom. How unfair it all seemed”

And later, recounting a date with a white guy from school that had ended in some ‘heavy petting’, “Years later, I recalled that he’d touched me, but he’d refused to kiss my mouth or face. My otherness was physically tangible.”

Finally, to note, that Jesmyn Ward seems incapable of writing a dull sentence and will go on to be a significant literary figure. Anyone who has read and learned about her upbringing will understand what a remarkable achievement that will be.

(As an editorial aside, I would love to ask Ward whether the sentence on pg 183, shouldn’t have the word ‘poetry’ rather than ‘pottery’ in the list of things her rebellious outsider crew at school loved: I’m sure there are anarcho-potters in this world, just not many of them around DeLisle.)