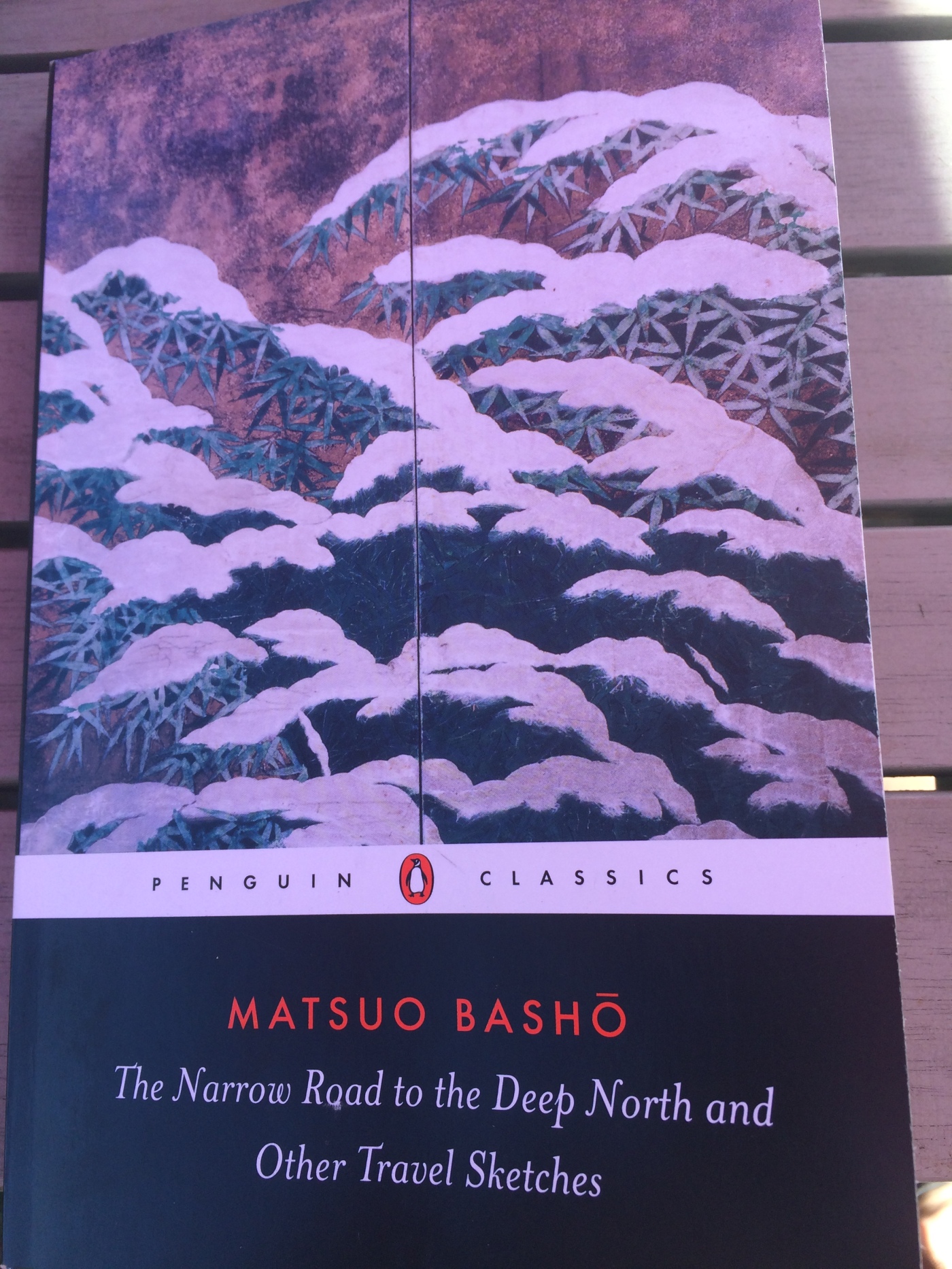 Under a blue sky
moon, reading Basho, the breeze
turning the pages

I could hardly avoid going back to this collection, after posting the review of the Flanagan novel, but it was a treat nonetheless. As well as a loving and informative introduction by Nobuyuki Yuasa – who also translated – there are several shorter travel pieces – glorying in titles like The Record of a Weather-Exposed Skeleton or The Records of a Travel-Worn Satchel – before we reach the piece often cited as Basho’s masterpiece.

The minor pieces are exactly that, thin fare in places, interspersed with the occasional gem, like this at end of the Weather-Exposed Skeleton piece when an exhausted poet writes:

Shed of everything else / I still have some lice / I picked up on the road – / Crawling on my summer robes.

There is a fundamental problem for appreciators of “western poetry”, in that we simply are not versed in cultural norms out of which this kind of poetry grew: in the main we are not comfortable and conversant enough with Buddhism nor do we practice meditation (I am as guilty as anyone of this charge), to an extent that would allow us to fully appreciate the significance of what is going on here, hence these verses can seem trite, lightly wrought things, trinkets. They are not that. The best of these poems have withstood half a millennium of appreciation and study. Their tiny frames can withstand a great deal. The fault lies with us and the parameters of our ability to appreciate. While I  am prepared to try to see my way into these words, I acknowledge that often, I fail. Basho has a bit of guidance with that as well:

…indeed all who achieved real excellence in any art, possess one thing in common, that is, a mind to obey nature, to be one with nature, throughout the four seasons of the year.

The set up with each of these pieces, is that in the mid / late 1600s Basho and a friend or two set off walking, sometimes having more of an idea of where they were going than others, sometimes even having a place or two set up to stay along the way. More often than not though, the “kindness of strangers” is what they relied on. Each piece has Basho’s prose narrative as its central framework, with poems, often what we understand today as haiku, hung as adornments on that framework; these poems may be strung together to form a chain, a series of impressions. The poems contained within are not solely the work of Basho, sometimes he quotes fellow travellers, sometimes older already extant poems, some of which may be the sole reason that Basho has chosen to visit a place.

I found the light-heart of the Travel-Worn Satchel section especially pleasing, and Basho warns us not to take it too seriously:

…I must admit that my records are little more than the babble of the intoxicated and the rambling talk of the dreaming, and therefore my readers are kindly requested to them as such.

Or, like when he tries to cross the snow-bound ‘Support-yourself-on-a-stick Pass’ on a horse but falls from the saddle, wishing ruefully that he had tried the stick. Or, when he and a travelling companion writes poems on the snow-laden brims of their hats.

As for the main poem, The Narrow Road to the Deep North, it is expansive and generous. He tells us at the outset that for a long time he has been ‘tempted by the cloud-moving wind – filled with a strong desire to wander.’ Although once on the road, his hit and miss style of bagging a night’s sleep somewhere, doesn’t always pay off. He was trapped for three days, by bad weather in this flop:

Bitten by fleas and lice, / I slept in a bed, / A horse urinating all the time / Close to my pillow.

Perhaps my favourite bit of this yarn is the description of people going grey with age as ‘getting their frost hair’.

And to finish with an example in prose, of when things were more agreeable:

I climbed Mount Gassan on the eighth. I tied around my neck a sacred rope made of white paper and covered my head with a hood made of bleached cotton, and set off with my guide on a long march of eight miles to the top of the mountain. I walked through mists and clouds, breathing the thin air of high altitudes and stepping on slippery ice and snow, till at last through a gateway of clouds, as it seemed, to the very paths of the sun and moon.

The Narrow Road is a rambling, idiosyncratic joy, you shouldn’t expect it to arrive anywhere, anytime…