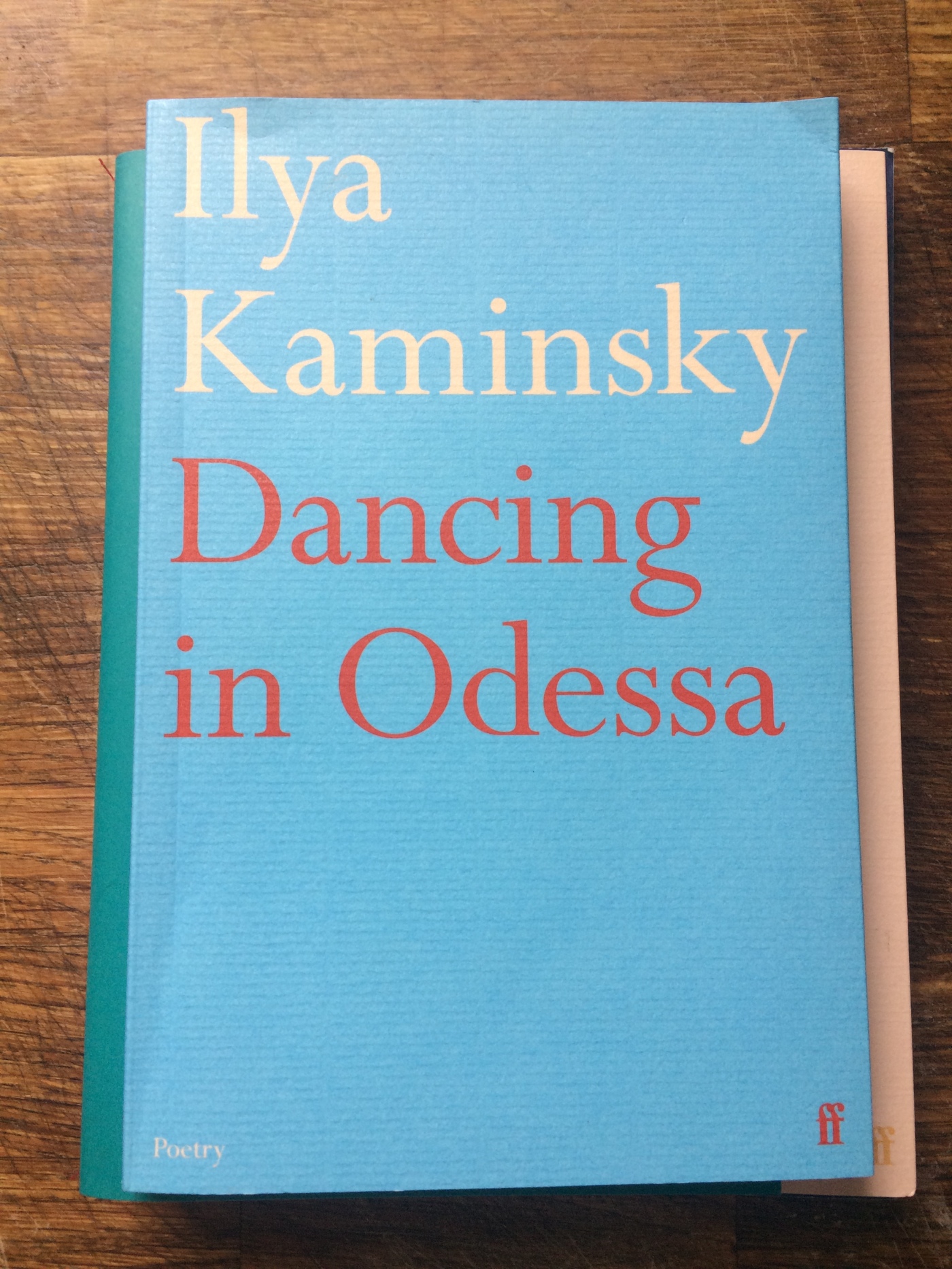 This is Kaminsky’s first collection, which of course I read second: and after being entranced by Deaf Republic any reader would rush to find something else by him. This is another delight. I find something utterly, purely euphoric in his poetry.

Part of my note-making, when reading, is simply to write down words to capture how I feel about this book, this poem, right at that moment: joy, surreal, Bulgakov, melancholy, fantastical, are a few of the words I wrote down while reading Dancing in Odessa through for the second time.

Following the opening poem – Author’s Prayer – the rest of the collection is presented in five parts, each having a sort of opening piece, an overture, often this is a prose poem, before we hit the main body of the section. And despite that opening Prayer bemoaning that he “must write the same poem over and over” he doesn’t, when he says “I will praise your madness“, he may be getting closer to the mark.

“In a city ruled jointly by doves and crows, doves covered the main district and crows the market. A deaf boy counted how many birds there were in his neighbour’s backyard, producing a four-digit number. he dialled that number and confirmed his love to the voice on the line.” So opens the section entitled Dancing in Odessa, before continuing, “my country cannot be found, its citizens meet in a dream to conduct elections.” Throughout, Kaminsky dangerously and thrillingly veers from comedic to political to tragedy in the space of a few lines, a few words; witness the following from In Praise of Laughter:

…the State declared him an enemy of the people. / He ran after a train with tomatoes in his coat // and danced naked on the table in front of our house – / he was shot, and my grandmother raped / by the public prosecutor.

He repeatedly asks what poetry is “all our words, heaps of burning feathers / that rise and rise with each retelling.” He asks what memory is, what stories we tell each other and to what purpose: “We lived in a city by the sea but there was / another city at the bottom of the sea / and only local children believed in its existence.” He is weaving fairytales, new fables, with enigmatic meanings, if any meanings at all. Just when we think we’re getting the hang of this, he chucks in some surrealism, dead-pan, such as the tale of his mother who lives on the seventh floor and keeps a pony, “‘And where will we keep it?’ ‘On the balcony‘”…of course. And when she is sixty “young, not young – my mother / gallops a pony on the seventh floor.“

In American Tourist we learn that when Moses broke the sacred tablets, “...the rich // picked the pieces carved with / ‘adultery’ and ‘kill’ and ‘theft’, / the poor got only ‘No’ ‘No’ ‘No’” We can only wonder, is there a bigger truth?

In the section Musica Humana, an elegy for Osip Mandelstam, Kaminsky tells us that “Poet is a voice, I say, like Icarus, whispering to himself as he falls.” On the other hand we could, “Pray for this man / who lived on bread and tomatoes // while dogs recited his poetry / in each street.” The poem A Toast begins, “October: grapes hung like the fists of a girl / gassed in her prayer. Memory / I whisper, stay awake” and ends, “...my fathers / unable to describe your dreams, drink / my silence from a cup.”

The innocent and sublime collide in much of what Kaminsky writes. In the next section, he wants to move with Natalia to Odessa and open a small sweet shop, where “…except for her lovers and my neighbours (who steal milk chocolates by handfuls), we will have no customers…” They live together for eight years, and he dissects this number as living “…with three cats in five cities.“

And then of course there is all the love. All the uplifting love he describes.

There can be tendency to overwrite praise of poetry, discussing it as some sort of god-touched discourse, a higher form of composition. I generally disagree with that kind of hyperbole but Kaminsky comes closer than most to justifying it.